Veteran Nollywood actress, Rita Edochie has reacted to a viral video that shows the moment a man raged as he kicked his heavily pregnant partner out of his house after she caught him with another woman.

The video serving rounds on social media shows the pregnant lady groaning over her partner’s flirtatious lifestyle and in turn, the man showed no remorse as he ordered her to get out of his house.

He could be heard saying she’s not the first person to get pregnant. The video has subsequently stirred concerns following its emergence online.

Reacting to the disturbing video, Rita Edochie kicked against insinuations about the incident being staged.


She went on to assert that a closer look at the heavily pregnant woman shows that she’s having contractions at the moment which caused her to hold her abdomen.

I CRY FOR OUR GIRLS


IF YOU ARE AN OLDER MOTHER, NOT MOTHERS OF TODAY, YOU WILL KNOW THAT THE BABY’S HEAD IS ALREADY DOWN.

SHE IS HAVING CONTRACTION AND THAT IS THE REASON SHE IS HOLDING HER ABDOMEN AND SOME PEOPLE ARE HERE SAYING IT’S ACTING.

IF IT IS ACTING, WHY IS THE RECORDING NOT CLEAR ?

IF WE FOLLOW THIS STORY WELL, YOU WILL HEAR THAT AFTER THIS SHOWDOWN THAT THIS LADY HAS PUT TO BED.


MY PRAYER FOR HER IS SAFE DELIVERY BECAUSE THIS SHOWDOWN ALONE CAN GIVE HER HIGH BLOOD PRESSURE.

ANYWAY IT IS WELL.”

Watch the video below: 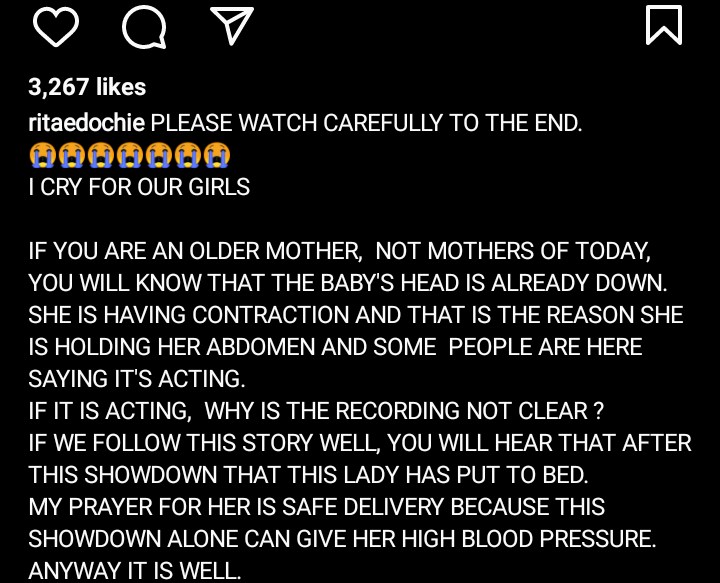